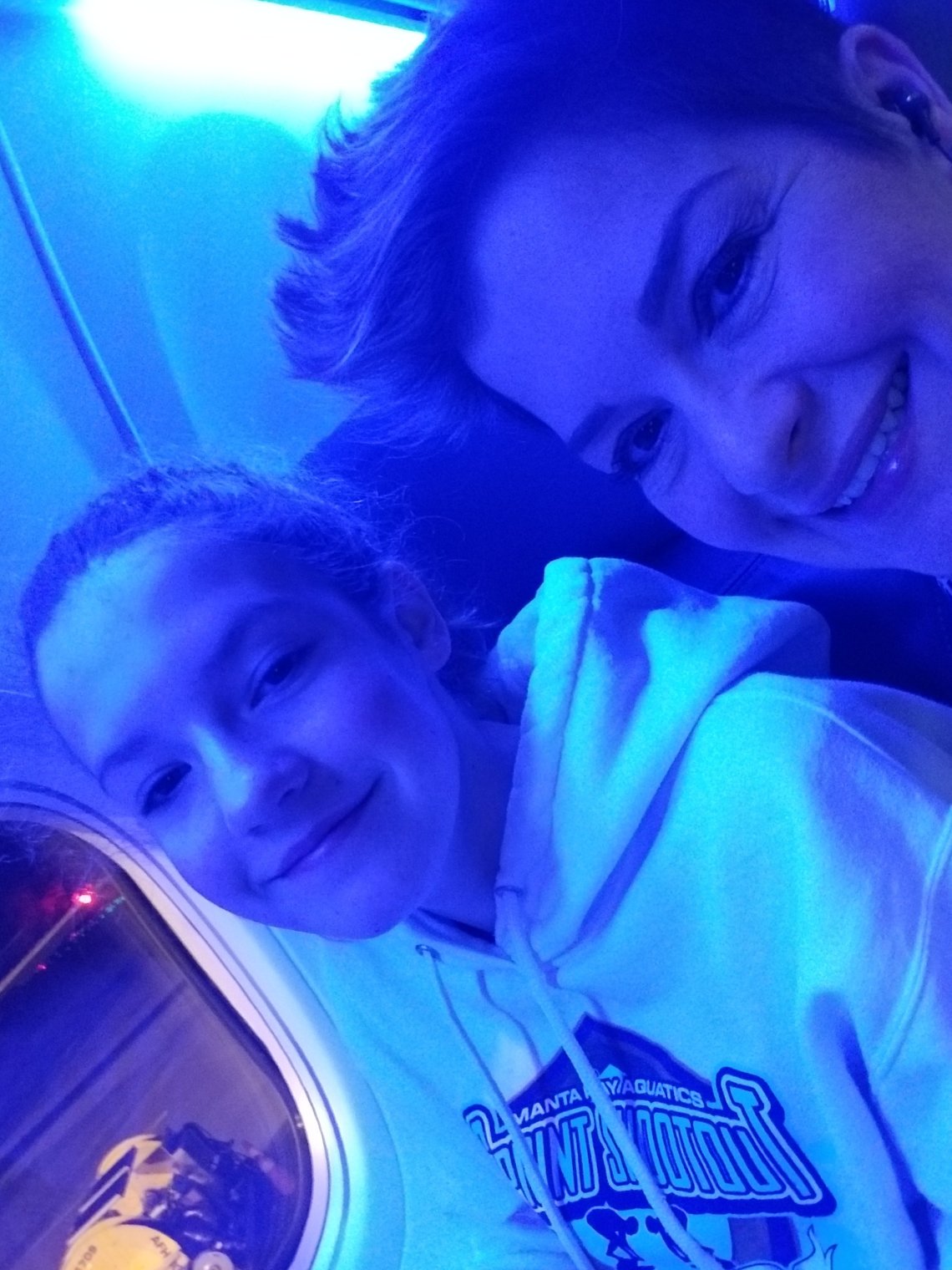 This week Kathryn and I are in Dallas so that she can train with Jamie’s old swim coach….the legendary Chris MacCurdy.

Honestly, I feel like we already know Coach Chris because Jamie has shared so many stories about growing as a swimmer on one of Chris’s teams. The stories have been evolutionary. When Jamie was my boyfriend (ahem, five minutes ago) it was about the hard-nosed coach who didn’t see eye-to-eye with the young man who wanted to take summers off to go on Boy Scout trips…the coach who called ahead on college recruiting trips to offer warnings about Jamie’s summer work ethic in the pool…the coach who lived and breathed swimming, only swimming, all the time. And also triathlons. Now that Jamie is my husband (since five minutes ago) and my partner in the most important job we will ever have – parents who are working hard to raise hardworking, smart, responsible, athletic, musical, kind, compassionate children – I have to admit that the stories and messages about Coach Chris have softened around the necessary edges. Other stories have become magnified around ideas that will help our kids grow to be the best versions of themselves in the pool and elsewhere too!

Kathryn was nervous to meet Coach Chris. She was worried she wouldn’t survive his practices. Jamie’s advice to have her times memorized was on point because in the first ninety seconds of their meeting Chris asked her about them! She rattled off her best times in every event and he said “it sounds like you have some good speed, but we probably have some tweaking to do.” He asked her to keep an open mind and then he proceeded to assign the dry land work to the team. After he came back inside he sidled over to me (where I was knitting on the bleachers) and said “parents usually wait out there, or outside, or in your car but you can’t stay here…it’s a closed practice” and then, for effect “insurance purposes.”

*takes knitting to the car*

So enjoy the one photo…because that’s all there is of the swim portion of this journey!

After practice we got the whole report from Kathryn. In addition, Chris took videos of Kathryn where he was talking through her strokes and giving her advice about what corrections she should make. She forwarded the emailed videos to Jamie so they can confer in the coming weeks.

Here are some of the practice highlights she reported each evening at dinner:

Kathryn had a great time and learned so much! Chris MacCurdy hasn’t changed much in all these years. He is still as fit as a fiddle and all about swimming all the time. Maybe hh is just a tiny bit softer because he welcomed Kathryn with a wee twinkle in his eye.

It isn’t often that we have the opportunity to know someone who is living their gift and truly embodying what they are on this planet to do. Chris MacCurdy does that…for Jamie, and now for Kathryn too.

My heart is full!

Chris MacCurdy Bio
Chris MacCurdy has 42 years of coaching experience including summer league, age group, senior, and collegiate levels. Chris is a Level 5 USA Coach, the highest level possible, as certified by the American Swimming Coaches Association. A member of the City of Plano Swimmers (COPS) staff from 1978 to 1997, MacCurdy served as Head Age Group Coach for 1 ½ years and as Head Coach for the remaining 18 years. Prior to coaching at COPS, MacCurdy founded, along with his brother-in-law, Jerry Heidenreich, a very successful USA team and swim school in the Garland area, then rejoined Heidenreich in the fall of 1997 to form the Academy of Texas Aquatic champions.

Under MacCurdy’s guidance, COPS developed into one of the most successful USS teams in the country. Achievements included five Texas Age Group Swimming (TAGS) championships in 1982, 1989, 1990, and 1991. COPS is the only northern Texas team to win a TAGS championship in the 20th century. COPS was a consistent competitor on the national level as well including six Junior National team championships and a Top Ten finish in the USS Senior National Championships. Chris has developed twelve high school age swimmers who have qualified for the U.S. Olympic Trials in 1988, 1992, 1996, 2000, and 2004, several National Age Group record holders, numerous National Age Group champions . His swimmers have been Junior National record holders, Junior National champions, Senior National finalists and a USA Swimming National Champion. They have also been United States Olympic Sports Festival medalists, high school and collegiate All-Americans, Academic All-Americans, and USS National Team members for international and national competitions including placing a swimmer on the 1998 US Goodwill Games team brining home a gold medal.

Chris has also been voted North Texas Swimming Senior Coach of the Year three times in 1991, 1992, and 1996.Chris has played major roles in United States Swimming on both the local and national level. He has served North Texas Swimming as Age Group Vice-Chairman, Senior Vice-Chairman, Technical Committee Vice-Chairman, and Coaches Representative and has served United States Swimming as delegate to the USAS convention, as a member of coaching staffs for regional and national select USS Camps, as a member of the USS National Camp Time Standards Committee and USS National Championship Site Selection Committee. Chris has been an instructor for the United States Swimming Coaches’ College at the Olympic Training Center. He has served the Texas Swimming Association (TSA) as a member and chairman of the TAGS Committee and the TSA All-Star Dual Meet Committee and is currently a member of the TSA Board of Directors and is the Treasurer of the Texas Senior Circuit Committee.

“Swimming F-A-S-T is FUN!” according to Chris, “Swimming smart, swimming with heart, and swimming to gain as much knowledge about oneself while pursuing personal and team goals allow each individual to experience life long benefits. Swimming is a four stroke sport. Everyone should emphasize all four strokes throughout their career for total body strength and for the variety and versatility one has for training and competition.”

As an age group swimmer for the City of Midland Swim Team, he won Texas State and International Swimming titles. A graduate of Texas Tech University, Chris holds a Bachelor of Business Administration degree.While at Tech, he was a four year letterman, four year Southwest Conference Championship finalist, school record holder, and team co-captain. He also served as an assistant swim coach for the Red Raiders. Today, Chris is still an active athlete in the sport of triathlon. In 2003, he was 3rd at the USA Triathlon National Championships in the 50-54 age group and in 2004 he was ninth in the World Triathlon Championships in that age group. He and his wife, Krissy, have been married 43 years and have two daughters, Jamie (35) and Ashley (32) and two granddaughters.

View all posts by altheagyde